One hundred and fifty Haitian gourdes is equivalent to just under three U.S. dollars–but this was the entire budget when Winter Luc first decided to expand his youth programs into a school in 2007. Ten years later, his two schools serve over 150 students, mostly from Cite Soleil. 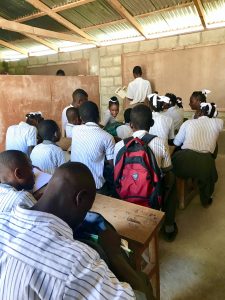 In 2006, Winter founded RAJEPRE in the Bwa Nef neighborhood of Cite Soleil. Winter has always wanted to contribute to the development of his country. His organization originally focused on running a community garden and offering youth development classes and activities for the local children. He soon realized that what many of the kids really needed was a school that they could afford.

According to the Haitian Constitution, education in Haiti should be free for all. Given the shortage of public schools, however, most students attend private school where they pay for tuition, as well as uniforms, books, and other supplies. For many children, especially in the poor neighborhoods of Cite Soleil, these expenses mean their families cannot afford to send them to school. 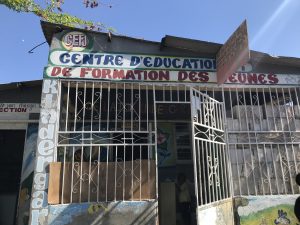 Winter rallied some volunteers, and together, they started looking for ways to start a school. They needed space; they found a woman who had some unused land she was willing to let them use. Theyneeded uniforms; they found a school in Delmas with extras they could donate. They needed funds; they found a grant that would give them the start-up funds they needed. With a little luck and a lot of hard work, they opened the doors of the Centre d’ Education et de Formation des Jeunes for the 2007 school year.

Today, CEFJ has expanded into two schools—one in the original location teaching kindergarten though sixth grade, and a second a few minutes down the road for grades seven to ten. They have more than 150 students and employ 21 staff members. Tuition is charged on a sliding scale so no student is asked to pay more than their family can afford. 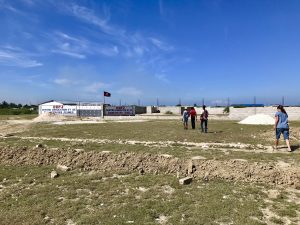 Soon, Winter hopes to expand further. At the second location, there is plenty of room for expansion and he hopes that one day the whole school can be there; they have already started building the fence and looking for ways to fund a new building. He worries that the old neighborhood might become dangerous if gang violence ever resurges. He also knows that by moving just down the street, the school can continue to serve the students of Bwa Nef while also building connections with the nearby neighborhoods.

Winter’s dreams for the school do not stop there, however. He wants to provide classes for young adults to learn technical and professional skills. He imagines building a conference room and other community spaces to facilitate exchange with people from all over. He wants to develop a media library. He has no intention of stopping anytime soon.

The majority of the students at CEFJ are on full scholarship. It is the only option they have for school.Winter and RAJEPRE work tirelessly to find donations and other funding to keep them there and learning everyday. Recently, they launched a sponsorship program where donors commit to paying a student’s tuition and expenses each month. Winter hopes that, with enough sponsorships, the program will be able to grow faster than ever.

To learn more about CEFJ and how to sponsor a student, visit their website. For more information about their parent organization RAJEPRE, click here. To make a donation, visit RAJEPRE on Omprakash.

Please Share This
Related Posts
Rebranding Haiti: TEDx Talk with Stephanie Price
Amazing TEDx talk by longtime partner and awesome friend, Stephanie Price from English in Mind…
Upgrading Our Staging
The Haiti Communitere stage has been designed and is almost finished with the rebuild by… Celebrating Global Handwashing Day With RAJEPRE and RAVAGEP!
One of Haiti Communitere's proudest initiatives since our launch back in 2010 is the Tab Wond (The Roundtable),…